A call for urgent international action

Occupied Palestine, 9 July 2011 – While the Arab Spring for freedom, democracy and social justice has exposed and challenged the collusion of world governments with autocratic and oppressive Arab regimes, many states and corporations continue their business-as-usual arms trade and military cooperation with Israel. Cooperation with Israel is maintained despite its systematic resort to massive violence against and killing of Palestinian and other Arab civilians, including school children and peaceful activists, and in spite of its increasingly brutal colonial policies against the Palestinian people and the persistent flouting of international law. Seven years after the International Court of Justice advisory opinion recommending international cooperation to ensure that Israel dismantles its illegal Wall in the occupied West Bank, and on the sixth anniversary of Palestinian civil society’s call for a broad campaign of boycott, divestment and sanctions (BDS) against Israel until it complies with international law, the Palestinian BDS National Committee (BNC) calls for immediate international action towards a mandatory comprehensive military embargo against Israel similar to that imposed against apartheid South Africa in the past.

Since its violent inception through the systematic ethnic cleansing of Palestine more than 60 years ago, Israel has inflicted endless death, injury, forced displacement, dispossession and destruction upon millions of Palestinians and other Arabs in neighbouring countries.

Israel uses military force to maintain an unlawful regime of occupation, colonialism and apartheid, which is put in place in order to control as much land with as few indigenous Palestinians as possible and to prevent the Palestinian people from exercising its inalienable right to self-determination. Israel has repeatedly violated international law, provoking or initiating armed conflicts aimed at territorial expansion through the annexation of occupied territory, which in the case of the Golan Heights has been qualified as an act of aggression by the UN General Assembly. Israel’s attempt to justify this kind of illegal use of belligerent military force as ‘self-defence’ does not stand up to legal or moral scrutiny, as states cannot invoke self-defence for acts that serve to defend an unlawful situation which they have created in the first place.

Israel has a documented track record of breaching international humanitarian and human rights law during its armed conflicts, including military operations, invasions and occupations of Palestinian and other Arab territory through, among others, the excessive and indiscriminate use of force and the deliberate targeting of civilian persons and infrastructure. This has resulted in repeated war crimes and crimes against humanity.

Furthermore, Israel has consistently taken advantage of its armed conflicts and military assaults for ‘field-testing’ its weapons and doctrines of warfare against Palestinian and Lebanese civilians, in partnership with its research institutes. Israel thus gives its military industry a comparative advantage on the global market in the pursuit of profits needed to sustain its occupation, colonialism and apartheid.

States and inter-state organizations, such as the United Nations, have a legal obligation to ensure that Israel complies with international law, but they have failed to do so. Impunity emboldens Israel while its international military trade relations bankroll and entrench its continued violence, militarism and expansionism.

Despite the irrefutable and abundant evidence in UN resolutions and reports by international human rights organizations of Israel’s unlawful use of force and weapons in aggression and the commission of crimes against humanity, war crimes â€” including collective punishment â€” and grave human rights abuses, foreign governments, multilateral bodies and companies continue their cooperation with Israel’s army and military industry, and are increasing their investments in or support for Israeli military-related research and development, much of which is conducted in partnership with Israeli universities. These governments, multilateral bodies and companies are knowingly profiting from and, therefore, complicit in Israel’s unlawful use of force.

Many world governments, as well as the UN, are still silent in the face of Israel’s massive arsenal of nuclear weapons, widely regarded by international civil society as among the most serious threats to world peace. In fact, several Western governments were or still are direct accomplices in the creation, development and deployment of Israel’s daunting nuclear threat.

A comprehensive military embargo on Israel is long overdue. It would form a crucial step towards ending Israel’s unlawful and criminal use of force against the Palestinian people and other peoples and states in the region and would constitute an effective, non-violent measure to pressure Israel to comply with its obligations under international law by:

1. Ending its occupation and colonization of all Arab lands (1967) and dismantling the Wall;

2. Recognizing the fundamental rights of the Arab-Palestinian citizens of Israel to full equality; and

3. Respecting, protecting and promoting the rights of Palestinian refugees to return to their homes and properties as stipulated in UN resolution 194.

In light of the above, the Palestinian BDS National Committee (BNC), the largest coalition of Palestinian civil society organizations, calls upon all people of conscience, movements and organizations worldwide to support this call for a mandatory, comprehensive military embargo on Israel and to pressure governments, multilateral bodies and the UN, as well as private and public companies and institutions, to:

2. Stop all military and dual-use imports (equipment, assistance and munitions) from Israel;

3. Stop the transfer of military products to and from Israel through national ports, territory and airspace;

4. Stop cooperation with the Israeli army, military companies, and military-related R&D projects, including joint ventures (whether bilateral or multilateral);

6. End all military aid to Israel;

7. Refrain from any cooperation with Israel in the manufacture and development of nuclear weapons and mobilize for a nuclear-free Middle East; 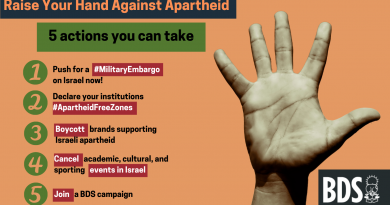 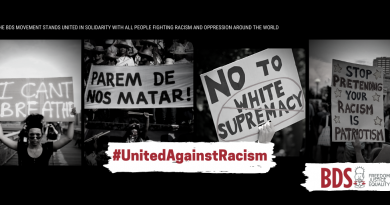 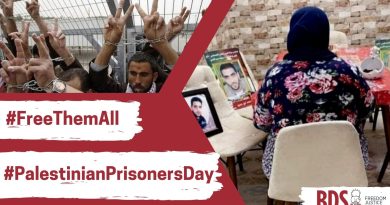