Open letter to the executive boards

We, a group of organizations and individuals from Germany, Israel and other countries, are concerned about your organization’s decision to support the 3rd Israel Congress (Berlin, Nov 10), a morally and politically problematic event. Under the guise of a scientific event, the conference is promoting right-wing elements in Israel and generating legitimacy to the illegal occupation of the Palestinian Territory.

The congress presents itself as a respectable and scientific event, but a careful look at the congress’s program reveals that it is indeed a very one-sided political event, which promotes a right-wing ideology.

Among the Israeli speakers who are invited to open the congress with their greetings are Israeli Minister of Justice Tzipi Livni 1, who is accused of war crimes and had to cancel a trip to the UK for fear of being arrested, because of her involvement in the unlawful attack against the Gaza Strip in December 2008-January 2009, during which chemical weapons were used and over 1,400 Palestinians were killed, most of them non-combatants.

Another speaker is Minster of the Development of the Negev and Galilee Silvan Shalom, who plays a key role in the Israeli government’s efforts to “Judaize” the Negev, through the deportation of tens of thousands of Bedouins by force. 2

Jerusalem’s Mayor Nir Barkat, who has dedicated his time in office to a rapid and forceful expansion of the illegal Israeli settlements in East Jerusalem, also appears in the program.

The purpose of the congress is to promote Israeli “Hasbara”, (public diplomacy). 3 Israel is, however, justly criticized for discriminatory policies, for the ongoing occupation of Palestinian and Syrian territory, for an inhuman siege on the Gaza Strip, the mass deportation of indigenous Bedouins from their homes in the south of Israel 4, for over 50 laws 5 which discriminate non-Jewish citizens of Israel. In response to this criticism, the Israeli government adopted a strategy of public relations, instead of reforming its own policies. This congress is one of the elements of this strategy!

It is not only failing to mention Israel’s unjust and illegal policies, but also seeks to justify them by legitimizing the organizations which enact these policies such as the JNF and the Jewish Agency (see below).

The keynote-speaker Yossi Vardi is indeed an expert of ‘Hasbara’ and advised the Israeli military in a ‘Hasbara’ panel in February 2011 6on how to flood the internet with pro-Israeli content, in order to avoid the embarrassment caused when the truth comes out about abuses committed by Israeli soldiers.

Supporting the congress is akin to a statement that Israel does not need to act to ensure the full rights of the population under its control.

In accordance to the European Union Guidelines 7 regarding Israel and the Occupied Palestinian Territory including East-Jerusalem, European institutions are instructed not to promote or fund projects which include components in the territory illegally occupied by Israel.

The 3rd Israeli Congress is funded by both the Jewish Agency and the Jewish National Fund 8 two organizations which are deeply involved in colonization activities in the occupied West Bank (including East Jerusalem) in violation of the 4th Geneva Convention (e.g. Canada Park 9, Silwan 10, Jordan Valley 11).

The Jerusalem Foundation, for example, which prides itself in promoting ‘co-existence’, has funded a Jewish school in the illegal settlement of Gilo in East Jerusalem, which children from the adjacent town of Beit Jala are prevented from attending 12.

Indeed, the European Union guidelines will only come into effect in January 1st, 2014, but we believe that their moral message of rejecting a military occupation is true today as it will be next year.

In addition to the organizations funding the event, the event proudly mentions the organizations which support it, including Taglit – Birthright Israel. This is an organization which offers free trips for Jews to visit Israel, telling them that the country belongs to them (including the illegal colonies), but not to the Palestinian refugees who were forcefully deported from these same areas.

The political nature of the event is apparent from the choice of the Israeli representative for the congress’s ‘political lab’. Former Knesset member Yohanan Plesner has been selected to exemplify Israeli politics.

In June 2nd, 2010, MK Plesner verbally abused MK Hanin Zoabi (Palestinian citizen of Israel), and shouted at her “I wish that you will go to Gaza for at least a week, and we’ll see you talking about women rights there, on civil rights. One week in Gaza and we will see what will happen to you. One week in Gaza, a single 38 year-old woman we will see how you will be treated there! So you, you are the last who can preach to us about morality.” 13

This chauvinistic and racist statement would be unacceptable, even if it was not uttered in defense of the killing of nine unarmed civilians on board the Mavi Marmara in May 2010 (where Knesset Member Hanin Zoabi was aboard). Having Yohanan Plesner invited as the speaker in the political workshop is a worrying statement by the conference organizers, who accept this kind of political perspective and allow him to promote his hateful politics in the conference’s ‘political lab’.

Inviting people who are possible war criminals like Tzipi Livni or organizations who are involved in the ethnic cleansing of the indigenous Palestinian population like the JNF, German Politicians and organizations instead should uphold International Law and Human Rights. There is a Call of the Palestinian civil society from 2005 14 that asks for implementing this and to pressure the Israeli Government through Boycott, Divestment and Sanctions (BDS). A growing international support for the BDS movement shows that more and more people in the world understand that this kind of pressure is needed. We further ask you to pay attention to the call for academic and cultural boycott from 2004. 15

The congress’s political lab is a site for right-wing ideologies of the Likud and Kadima parties, with no representation for a left-wing party. Even the so-called academic speaker Prof. Shlomo Avinery is a former CEO of Israel’s Ministry of Foreign Affairs, a clear representative of the Israeli institutional elite and one of the people who have made the occupation of the Palestinian territory for so many decades possible through his work in justifying Israel’s policies.

The political lab discusses matters which are conveniently chosen in such a way that ignores the difficult questions of the Israeli illegal and ongoing occupation, the support given by the German government to this occupation and the arms trade between the two countries, including the controversial supply of nuclear weapons-capable submarines to the Israeli navy.

The science lab has the least amount of text in it. Clearly science is not one of the important elements of this congress.

The religion lab merits a particular mention – in the discussion of the religious matters between Israel and Germany, there is no mention of the Islam and no Muslim speaker. The choice to focus on Judaism and Christianity demonstrates that this congress represents the political ideology of organizations such as Pro-Deutschland, or the Israeli right-wing.

The list of supporters and friends of the congress offers the final and conclusive proof that this congress is in fact a pro-settlement congress. The prominent role of the JNF (including the opening greetings by Efi Stenzler, president of the JNF) cannot be concealed, as is the involvement of the Jewish Agency and the Jerusalem Foundation.

The Hebrew University, itself built on 3,000 dunams of occupied Palestinian land, and the three Israeli banks who sponsor the event: Bank Hapoalim, Bank Leumi and Mizrahi-Tfahot 16, all banks which are part of the occupation economy and profit from the occupation – all accumulate to a clear picture that this conference is a pro-settlement conference.

In situations of conflict, it is our moral duty to listen to the victims. As Noble Peace Prize laureate Archbishop Desmond Tutu (South Africa) said: “If you are neutral in situations of injustice, you have chosen the side of the oppressor. If an elephant has its foot on the tail of a mouse and you say that you are neutral, the mouse will not appreciate your neutrality.” 17

Please take a stand!
Be on the side of the oppressed and withdraw your support of the Israel Congress 2013!

We will gladly address any questions or comments.
Contact: bdsmovement-Berlin@web.de 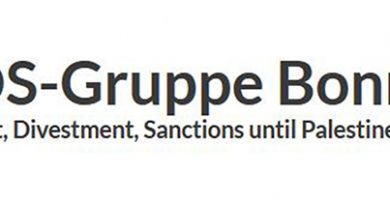