In the two weeks of the latest Israeli military aggression in the Gaza strip, whole families have been wiped out, and over 600 Palestinians have been killed, almost 80% of them civilians and a third of them children. Over 1.8 million Palestinians are trapped in an occupied and besieged small piece of land that Israel has turned into an open-air prison, subject to daily bombardment by Israeli rockets and heavy artillery. For seven years, Palestinians in Gaza have been under a brutal and illegal siege whose purpose is to destroy the conditions of life and break the spirit of the people. The siege and the recurrent bombing have created a humanitarian catastrophe, with critical shortages of water, food, and medical supplies. Freedom of movement, the right to education and access to health services have been extensively denied by the Israeli occupation.

Israel’s goal in this latest aggression against Palestinians in Gaza and the West Bank, including East Jerusalem, is to perpetuate the occupation. This year we mark ten years since the International Court of Justice (ICJ) ruled that the construction of Israel’s wall and its associated regime in the occupied Palestinian West Bank – of settlements, land confiscation, separate roads, permit systems and movement restrictions – is illegal under international law. Yet in ten years the international community has allowed Israel to continue construction on occupied territory and continue its system of occupation, apartheid and colonialism against the Palestinian people.

While governments prevaricate and allow Israel to act with utter impunity, and most of the mainstream media parrots Israel’s Orwellian propaganda, civil society solidarity is the only force that can help stop the ongoing slaughter of our people and send them a message that they are not alone, exactly as effective international solidarity had done in supporting the struggle for freedom in apartheid South Africa. In the face of this international inaction, we, the Palestinian trade unions, call on trade unions around the world to take urgent measures, and in particular to intensify Boycotts, Divestments and Sanctions (BDS) against Israel, until it complies with international law.

We ask you to consider the following actions:

Today more than ever, solidarity with Palestinians workers and their families in Gaza and the rest of the occupied Palestinian territory is an essential component of progressive, principled trade union politics. Given the complete failure and unwillingness of governments to hold Israel accountable to international law there is widespread recognition that Israel’s occupation must be isolated by the pressure of civil society.

We rely on our brothers and sisters in the trade union movement internationally to continue a proud tradition of international solidarity and to stand with us as you stood with the struggle against apartheid in South Africa.

With the support of:
Congress of South African Trade Unions

Posted on July 30, 2014 by The Palestinian trade union movement and the Congress of South African Trade Unions 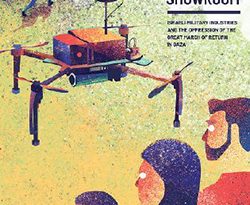