A statement from the Palestinian BDS National Committee

One year ago today, Israel launched a brutal military attack on the Palestinian population of the occupied and besieged Gaza Strip. More than 2,200 Palestinians were killed, including 551 children, and more than 10,000 people were seriously injured and hundreds of thousands were made homeless, forcibly displaced and trapped inside Gaza. Deliberate attacks on Palestinian civilians of this kind are part and parcel of an Israeli policy that aims to force Palestinians into submission and to thwart the Palestinian people’s exercise of its right to self-determination.

Implementing its Dahiya doctrine of disproportionate force, Israel deliberately attacked entire civilian areas in Gaza, targeting homes, schools, hospitals and mosques in an attempt to inflict as much human suffering as possible. The Commission appointed by UN Human Rights Council and many reputable human rights organisations have documented how Israel contravened international law and repeatedly carried out war crimes.

Gaza remains under siege as Israel implements against it a policy described by Israeli historian Ilan Pappe as “incremental genocide.” Israel’s often deadly attacks on Palestinians continue. Most of the water has been contaminated and deemed unfit for human consumption, food and basic supplies remain scarce, and as Palestinian organisations have noted, Gaza is approaching an irreversible breaking point.

In the meantime, Israel is working relentlessly on annexing most of the occupied West Bank (including East Jerusalem) through the expansion of its settlements and Wall, both considered illegal under international law. Israel deprives Palestinians of access, residency and development in East Jerusalem and conducts a campaign of ethnic cleansing in 60% of the occupied West Bank (Area C), forcing rural Palestinian communities from their land, pushing them into the fragmented enclaves, and violently repressing their non-violent popular resistance.

Palestinian citizens of Israel face similar ethnic cleansing, in particular in the Naqab (Negev), while more racist laws are approved or debated by Israeli lawmakers with the aim of preventing challenges to Israel’s regime of Jewish supremacy and apartheid.

Ten years on from its launch on 9 July 2005, the Palestinian civil society-led Boycott, Divestment and Sanctions (BDS) movement is widely supported by social movements, grassroots organizations, unions, churches, NGOs and political parties across the world and has started to effectively challenge Israel’s impunity.

Effective grassroots BDS campaigning has forced some of the world’s largest corporations, including Orange, G4S and Veolia, to gradually withdraw from Israeli projects that violate international law. From major US churches to private European banks, divestment from Israel is becoming acceptable and understood as necessary to bring about freedom, justice and equality. In Latin America, major state contracts with Israel companies have collapsed after grassroots pressure.

Academic and cultural boycott aspects of BDS have also taken off in the last few years, with major US academic associations endorsing a full institutional boycott of Israel’s universities. Lauryn Hill, Thurston Moore and other prominent performers have recently cancelled scheduled performance in Tel Aviv, adding their names to a growing and illustrious list of artists, including Roger Waters, Faithless, Elvis Costello, among many others, who refuse to perform in Israel.

The impact of BDS has reached the Israeli economy. A recent UN report shows that foreign direct investment into Israel fell by 46% in 2014, with one of the authors of the report stating that this was partially due to BDS. A study by the Rand Institute predicts that BDS may cost Israel about $47 billion over 10 years.

Whereas they once dismissed BDS as unimportant, the highest levels of the Israeli government now consider the movement a “strategic threat” to their regime of oppression and are allocating large resources to fighting it. The tide is turning against Israeli apartheid and settler colonialism and the increasing boycotts and isolation will end only when all Palestinians can enjoy freedom from racist oppression and the refugees can return.

Much still to do

Governments, particularly in the West, continue their collusion with Israel’s regime, protecting it from sanctions and continuing business as usual with it, in most cases against the democratic will of their respective citizens.

Just as the Palestinian people continues to resist and struggle for its inalienable rights, people across the Arab world and beyond continue to struggle to build a better world. Anti-racist movements, anti-austerity struggles, campaigns for economic, social and ecological justice across the world are all united in our belief that it is possible and necessary to create a better world. If we want to succeed in this task, we must find ways to deepen and strengthen the links between our struggles.

Palestinian oppression and dispossession continues to intensify under Israel’s brutal regime of apartheid and settler colonialism, but BDS is a key and growing source of inspiration for the Palestinian people. The Palestinian BDS National Committee deeply appreciates the tireless efforts of BDS activists and BDS supporting organisations around the world. You inspire us and give us hope.

We urge international civil society, including trade unions, NGOs, grassroots movements, political parties and parliamentarians to join us in intensifying BDS by:

— Building broad and mass boycotts, divestment and sanctions campaigns against Israel and the international institutions and companies that support or otherwise profit from its crimes.

— Raising broad public awareness about the Israeli regime of occupation, settler colonialism and apartheid that oppresses the Palestinian people, and the moral and legal duty to resist it.

— Increasing pressure on governments and the UN to impose an immediate military embargo on Israel and to suspend all forms of cooperation and free trade agreements with Israel until it fully complies with its obligations under international law.

Ten years after the launch of BDS, isolating Israel’s regime has become more crucial than ever and more realistic than ever. We shall overcome. 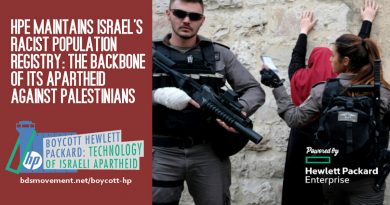