Many thanks to Benjamin Weinthal and the Jerusalem Post. It is really great, after all these years, to finally receive so much attention (Statement in German was published Feb 29, 2016) !

Also here in Germany, the many years of political work in the BDS Campaign is finally beginning to bear its first fruit. How many times were we told that the political situation and the discourse in Germany would never change to such an extent that Israel’s violations of international law would be seen and treated as such in our country? BDS, the Palestinian Civil Society Call for Boycott, Divestment and Sanctions against Israel until it complies with international law and universal principles of human rights would have no chance of drawing attention and even less of winning support in Germany, whereas this appeal has and is being picked up positively in many areas of the rest of the world.

The first point raises a number of questions: What information has the DAB Bank passed on to whom? How did the Jerusalem Post know that this is a ‚top BDS-linked account‘? Well, most likely, the Jerusalem Post employees had engaged in years of research to discover the sensational revelation about this bank account. One click on “Impressum / Unterstützung” (“site notice”) of our webpage www.bds-kampagne.de would have sufficed.

The second point may sound somewhat banal. After all, many political groups and organizations do this: They organize political activities and then report on them. Until now, we had assumed that the Jerusalem Post was a newspaper claiming to ‘objectively’ report on various issues. Now, we are forced to recognize that the Jerusalem Post is a political organization, pursuing its own objectives and concepts with the aid of its press organ.

The international BDS Campaign is basing its argumentation on international law and it is explicitly a non-violent campaign. It is raising the same demands as were formulated in numerous UN resolutions and other international agreements with the support of the overwhelming majority of countries: The end of occupation, equal rights for Israel’s Arab-Palestinian citizens, and the right of return for Palestinian refugees. The means used to reach these goals are inspired by international law.

The appeal is addressed to “people of conscience all over the world,” to boycott companies and their products, profiting from the occupation and Israel’s apartheid policy, to divest from these companies or sell their shares and to pressure their respective governments to impose sanctions against the Israeli state, as they had done so many times against other countries, which had not complied with international law.

Because of its transparency and legitimacy, the approach taken by the Palestinian-led international BDS Campaign can hardly be criticized. Who wants to openly oppose an end to the occupation, equal rights for Israel’s Arab-Palestinian citizens and the right of return for Palestinian refugees? The only thing left is to try to ignore it as long as possible. If the campaign still achieves a certain degree of prominence, the only thing left is defamation and misrepresentation. This is what the Jerusalem Post and its employees are obviously prepared to do, who – under the guise of journalism – support and implement the Israeli government’s ‘Hasbara’.

He seems to have scored his first goal. The DAB Bank will actually close down the BDS account on April 4, 2016. But, does this mean the end of www.bds-kampagne.de? No, of course not. The webpage is still online. Financial contributions to support the webpage are still welcome and can still be directly made (until April 8, 2016) onto the Konto (account indicated on the webpage).

With his article, Weinthal also provided a good example of how to misrepresent and defame a campaign. He wrote:

„It is unclear if action by BNP Paribas against the BDS-Kampagne account is connected to possible violations of French anti-BDS or anti-terrorism laws. “

If a connection cannot be proven, one therefore writes “it is unclear if…” Whatever follows does not have to be related, after all, it was already stated that “it is unclear.” Therefore, the best thing is to add something really horrible so that at least something sticks in the reader’s mind, the next time he or she reads about the BDS campaign. Quickly slip in the term ‘terrorism’. The Jerusalem Post journalist knows very well that French laws play no role in this German context.

The term ‘terrorism’ seems to not be suggestive enough. With supplementary questions, a wide range of allusions is made. After all, the man is a journalist, and asking questions is part of his job. Moreover, it does not matter if these questions are not answered. No limits are set for introducing suggestive terminology.

„… declined to respond to the queries, including questions about BDS-Kampagne’s views of Hezbollah and Hamas, which are designated by the EU and US as terrorist organizations, and about the Iranian backed al-Quds Day protests in Germany.“

Which questions would one ask, if one really wants to know about the BDS campaign? About its aims? Its reasons? Its methods and successes? About its forthcoming campaign priorities? None of this is of interest! He asks about Hezbollah, Hamas, al-Quds Day.

This is not a very original method. However, this type of suggestive approach requires the readers’ relentless critical attentiveness, if they do not want to – involuntarily or unconsciously – fall victim to malicious conjecture, a flaw or inattentiveness that can happen to anyone. This is exactly what the Jerusalem Post journalist is relying on.

We have often realized that our participation in joint projects were made dependant upon questions that have nothing to do with BDS. The BDS campaign is an open and transparent movement with nuanced arguments. In numerous publications, the Palestinian BDS National Commitee (BNC) has explained the campaign’s fundamental basis. All this can be read – often in German – on our webpage www.bds-kampagne.de under the heading ‚Grundlegende Erklärungen‘ (Fundamental Declarations). We do not expect everyone to be in agreement or find them useful. Everyone is free to decide whether he/she would like to support the BDS campaign under these conditions and on the basis of these declarations. We, therefore, are not compelled to take positions on issues that have nothing to do with BDS.

Our role as webpage editors is clearly stated under the heading Selbstverständnis (self-conception): ” BDS-Kampagne makes information available concerning Germany-wide activities within the framework of the international BDS movement, which is responding to the 2005 Call of Palestinian civil society.”

Completely devoid of context, one reads in the Jerusalem Post article,

So what? In fact, the BDS campaign is an international grassroots movement. In fact, it was initiated when the failures of the international community became clear in the aftermath of the Advisory Opinion issued by the International Court of Justice on July 9, 2004. The Opinion stipulates:

“Regarding the legal consequences for other States:

The international community – the German government and EU included – has failed, because it has, in no way, lived up to its own standards. And this is still continuing today. This is the reason for the BDS campaign. Whoever seeks to use against the campaign, the fact that political leaders reject our campaign, has not understood or apparently does not want to understand the campaign, but would rather revert to confusion and misinformation.

Lacking incriminating arguments, the article, of course, does not hesitate to make reference to the 1930s Nazi campaign.

Anyone who finds on our webpage, any indication of us having distorted the BDS campaign in such a way, will be treated to a delicious ice cream cone. In its declaration ‘BDS Movement Position on Boycott of Individuals’, dated February 21, 2013, the Palestinian BDS National Committee (BNC) stated very clearly:

“The global BDS movement has consistently adopted a rights-based approach and an anti-racist platform that rejects all forms of racism, including Islamophobia and anti-Semitism.”

Arguments oriented on German Nazi slogans are incompatible with an engagement in the international BDS campaign. If outsiders still perceive or imply an analogy, they have either completely misunderstood the campaign or seek to draw a false association to defame it.

Finally we again would like to thank the Jerusalem Post and its employees. They have offered us the perfect occasion for comprehensively informing about the BDS campaign and once again demonstrating its legitimacy to a wider public. We will continue to provide information on this fast-growing and successful international BDS campaign on our webpage www.bds-kampagne.de, on facebook www.facebook.com/BDSKampagne.de and on twitter @BDSKampagne 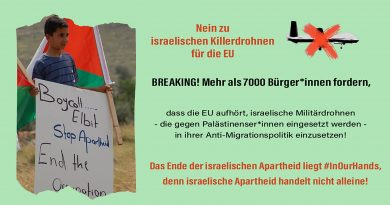