To whom it may concern,

We are Israeli citizens, active against our government’s policies of occupation, colonization and apartheid. We would like to express our solidarity with Christoph Glanz (Oldenburg, Germany). Christoph is a dedicated human rights activist, who has done a lot to raise awareness of Israeli human rights violations towards the Palestinian people. For his efforts, he has been vilified in the ugliest manner by several German groups and individuals, who are standing on the wrong side of history.

We would like to stress that the fundamental right to free speech is apparently being suspended in Germany when it comes to the state of Israel. This happens via the intimidation of venues hosting events on Palestine (Munich, Freiburg, Bremen, Oldenburg et al). The incidents in Oldenburg also included (incomplete list): a „Shitstorm“ email campaign, an open letter signed by lecturers of the University´s Philosophy Department, violent threats against venues and hosts of BDS events with at least partial complicity of police and administration in all of this.

Furthermore, supporters of Israel’s illegal policies are using anti-Semitism allegations to malign German citizens (and even Israeli citizens) who are merely calling for equality in human rights and advocating non-violent action to attain this goal. Christoph himself has been called a „known antisemite“ working for an „antisemitic organisation“. We hope that the Landgericht Oldenburg (local court) rules in favour of the restraining order eventually forcing the SPD-politician and member of the University´s Senate who raised these absurd claims to cease to do so.

The Palestinian-led BDS call is similar to the boycott call regarding Apartheid South Africa, several decades ago. We know that campaign was legal and widely supported in Germany at the time. Just as that campaign was not racist against white South Africans, BDS is not an antisemitic campaign. Prominent human rights activists all over the world, including numerous South African, Jewish and other personalities, from Desmond Tutu to Judith Butler, have endorsed the BDS campaign.

Even those who do not agree with BDS, should agree that it is a legitimate campaign. For example, at least three European governments –Sweden, Scotland, the Netherlands- have recently stated that the BDS call falls within the right to free speech. In a city which fought hard to get its university called after Carl von Ossietzky- the journalist and resistance fighter against the Nazis who was so well known for his sharp mind and pointed pen- we would expect to see a lively public debate, rather than silencing. We hope to see the Kulturamt Oldenburg (Department of cultural affairs), and the Municipality in general retract, their decision to withdraw from a signed contract only days before the BDS talk at the PFL venue, and offer the public space needed to discuss, and promote (based on free speech) the BDS campaign.

We would also like to state that Christoph Glanz, in particular, is an exemplary human rights activist. Christoph knows Israeli society well and worked with disabled people in Israel as part of his Zivildienst (citizen’s service) for 1.5 years. Christoph has helped get antisemitic content banned from social media, organized a media group of high school students to commemorate the local „Kristallnacht“, and much more.

We find it shameful that supporters of Israel’s illegal policies –in particular the head of the German Israeli Friendship Society (DIG)- are abusing the memory of the Holocaust to promote hatred and McCarthyism. We find it shameful that Israeli citizens, some them descendants of Holocaust refugees, are also being silenced in Germany. For example, we are well-aware of the successful attempt to prevent Israeli citizen Ronnie Barkan from speaking on Palestine/Israel in Oldenburg recently.

We are committed to a struggle for free speech, including free speech on the Palestine issue. We also challenge those who are opposed to BDS to an open debate. We intend to keep monitoring this situation.

On behalf of
Boycott! Supporting the Palestinian BDS Call from Within 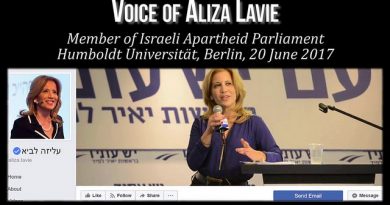 Speaking Up in Times of Apartheid