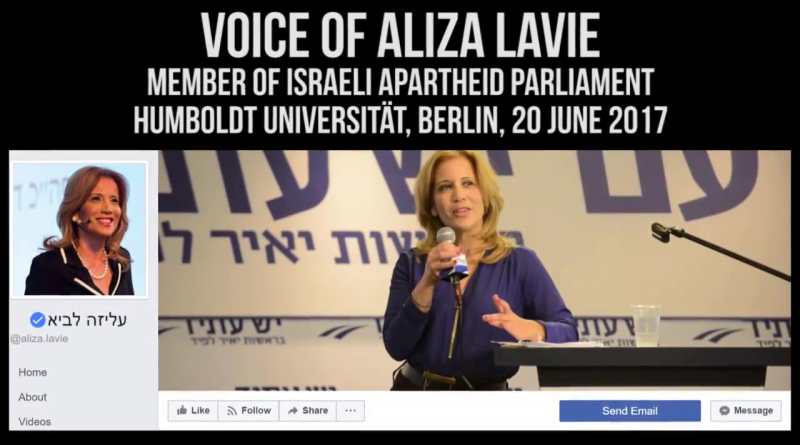 Dedicated to MK Aliza Lavie, who in her own special way is helping us end Israeli apartheid. Here is what Lavie herself posted before the event:

“Where they burned books.
At the entrance to the University of Humboldt in 1933, German students and lecturers burned tens of thousands of books of Jews and opponents of the Nazi regime.
Today, 2017, at this very moment, Holocaust survivor Dvorah Weinstein, along with a young delegation of Yesh Atid and MK Aliza Lavie, has come to talk to students and lecturers from the same university to tell our truth and to fight the lies of the BDS organizations.
The place is the same place, the lies are the same lies, and anti-Semitism still grunts evil and hatred. But this time we will not be silent. We will carry on fighting the lies and anti-Semitism.
Dvorah, we’re proud of you!”

And here’s what self proclaimed journos like Benjamin Weinthal and Hezki Baruch had claimed, respectively, following the event: “Twenty BDS activists stormed the talk” and that “At the end of the event, 20 BDS activists were waiting outside, so Lavie and the members of the delegation were taken out through the back exit and were accompanied by security”.

Fact: There were only THREE of us: two Israelis (read: citizenship=”Israeli”;nationality=”Jewish”) and one Palestinian. But in a Weinthal kind of reality you can’t give equal value to people, Israeli-Jews vs. the rest of the world, so it adds up to something like this: 2×10 + 1×0 = 20.

In conclusion, taking inspiration from those who did so in the past, here is a message to be reiterated whenever challenging Zionist crimes today or Humboldt’s past and present complicity in crime:
“Wir schweigen nicht, wir sind Euer böses Gewissen…”
“We will not be silent. We are your bad conscience…”

Hi folks,
We have seriously touched a nerve with the recent disruption of apartheid representative and Chair of anti-BDS lobby, MK Aliza Lavie, at Humboldt University in Berlin.

Now there are tons of articles (if you can call them that) spouting the same fictitious lines that were handed to them by the Hasbara machine, telling a fantastic story and obviously and most importantly – accusing us of Antisemitism. (can you hear the journalists’ pens shaking from here?)

So how about we simply confront them with the facts?
That can’t be too difficult, right?

2) Comment in the talkbacks giving the video link which has so far been censored by every single news organization.

3) Pray for the Germans who desperately need a non-Zionist media outlet. 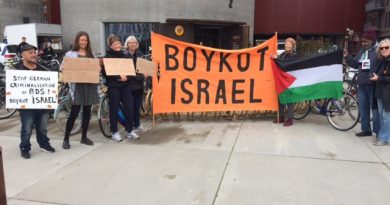 Open Letter To the German Embassy in Denmark From Boykot Israel