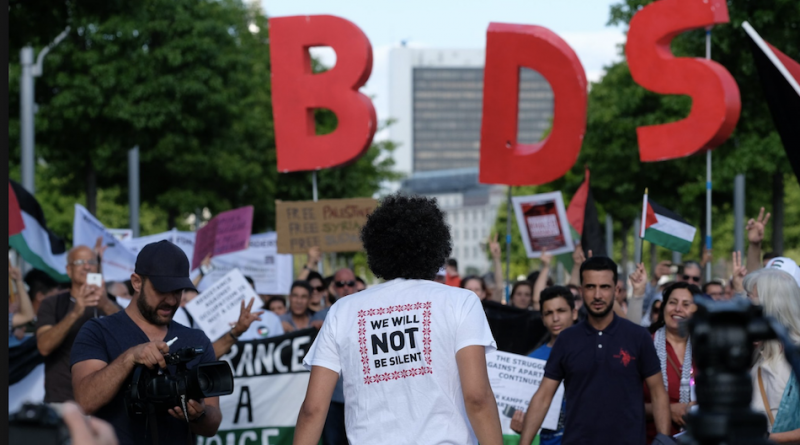 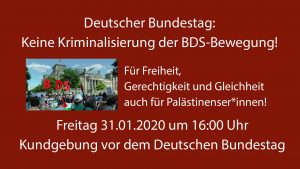 In this connection, we would like to bring to the attention of your Excellency’s Government information we have received concerning the motion CDU/CSU, SPD, FDP and Bündnis90/Die Grünen “Resisting the BDS Movement with Determination – Combating Anti-Semitism” adopted by the German Bundestag on 17 May 2019, which includes undue restrictions to the rights to freedom of opinion and expression, peaceful assembly and of association.

According to the information received:

On 15 May 2019, the joint motion CDU/CSU, SPD, FDPand Bündnis90/Die Grünen “Resisting the BDS Movement with Determination – Combating Anti- Semitism” (“the motion”) was presented to the German Bundestag.

The motion condemns the argumentation patterns and methods of the Boycott, Divestment and Sanctions (BDS) movement as anti-Semitic. The motion specifically cites the “Don’t Buy” stickers of the BDS movement as invoking the Nazi-era boycott of Jewish businesses “Judenboykott,” by employing the slogan “Don’t buy from Jews”.

In this regard, the motion welcomes that many municipalities in Germany have already decided to refuse financial support and municipal premises to the BDS movement or groups pursuing the objectives of the campaign.

The motion calls on governmental bodies not to make premises and facilities under the Federal Government available to organisations which express themselves in an anti-Semitic manner or question Israel’s right to exist, and calls on the Federal Government not to support any events organised by the BDS movement or by groups pursuing its aims.

The motion also calls on governmental bodies not to financially support any projects which call for a boycott of Israel or which actively support the BDS movement, and calls on German states (Länder), cities and municipalities and all public actors to join this approach.

We wish to express our concern that the motion sets a worrying trend of unduly limiting the rights to freedom of opinion and expression, peaceful assembly and of association in its call for governmental bodies, as well as German states, cities and municipalities and other public actors, to refuse financial support, premises or facilities to projects or events organised by the BDS movement or by groups pursuing its aims. Accordingly, the motion unduly interferes with the right of people in Germany to engage in political speech, namely, to express support for the BDS movement.

We further express our concern that the motion may hinder the peaceful activities of human rights defenders, groups and organisations denouncing human rights violations as part of the BDS movement by shrinking the civic space available to them to express legitimate grievances.

The BDS movement defines itself as “an inclusive, anti-racist human rights movement that is opposed on principle to all forms of discrimination, including anti- Semitism and or Islamophobia”, that targets corporations and institutions deemed “complicit” in the State of Israel’s violations of international human rights and international humanitarian law.

It is not anti-Semitic to criticise the Government of Israel. However, where there is evidence of anti-Semitic intent in campaigns, advocacy or practices, such acts must be condemned. We recommend that States analyse alleged manifestations of anti-Semitic hate speech in terms of the context, speaker, intent, content and form of an act, in line with approaches taken by the Human Rights Committee and the Rabat Plan of Action. General recommendation No. 35 of the Committee on the Elimination of Racial Discrimination is also vital in this regard.

We take note of and are encouraged by recent regional court decisions taken in Germany since the adoption of the motion that have ruled in favour of groups or organisations excluded from cultural events on grounds of their support for the BDS movement, including by the Administrative Court of Cologne (Verwaltungsgericht Köln) on 12 September 2019 (14 L 1765/19) and 18 September 2019 (14 L 1747/19) and by the District Court of Munich (Landgericht München) on 23 September 2019 (12 O 13183/19).

As it is our responsibility, under the mandates provided to us by the Human Rights Council, to seek to clarify all cases brought to our attention, we would be grateful for your observations on the following matters:

We would appreciate receiving a response within 60 days. Passed this delay, this communication and any response received from your Excellency’s Government will be made public via the communications reporting website. They will also subsequently be made available in the usual report to be presented to the Human Rights Council.

Please accept, Excellency, the assurances of our highest consideration.

David Kaye, Special Rapporteur on the promotion and protection of the right to freedom of opinion and expression

Clement Nyaletsossi Voule, Special Rapporteur on the rights to freedom of peaceful assembly and of association

Michael Lynk, Special Rapporteur on the situation of human rights in the Palestinian territory occupied since 1967

Ahmed Shaheed, Special Rapporteur on freedom of religion or belief

In connection with above alleged facts and concerns, we would like to refer your Excellency’s Government to articles 19, 21 and 22 of the International Covenant on Civil and Political Rights (ICCPR), which was ratified by Germany on 17 December 1973. The obligation to respect and guarantee these rights extends to all branches of government, including the legislature (General Comment No. 31, para. 4, and General Comment No. 34, para. 7)

We remind your Excellency’s Government that any restrictions to the exercise of these rights must be provided by law, pursue a legitimate aim and be necessary and proportionate to the aim pursued under articles 19(3), 21 and 22(2) of the ICCPR.

The scope of the right to freedom of expression is broad. Article 19(2) of the ICCPR “protects all forms of expression and the means of their dissemination”, including political discourse, commentary on one’s own and on public affairs, canvassing and discussion of human rights, such as boycott movements (General Comment No. 34,  paras. 11 & 28). Boycotts have long been understood as a legitimate form of political expression under international human rights law.

We also express our concern that certain provisions in the motion are contrary to article 21 of the ICCPR, which protects freedom of peaceful assembly, by calling upon the Federal Government to refuse access to municipal premises and facilities and to refrain from supporting events organised by the BDS movement or groups associated with it. In addition, we take note of the motion’s broad language that extends to a large category of actors who may be stigmatised by the legislation

Furthermore, the right to freedom of association under article 22 of the ICCPR requires States parties to take positive measures to establish an enabling environment for associations. States additionally have a negative obligation not to unduly obstruct the exercise of the right. Associations, pursuing objectives and employing means in accordance with international human rights law should benefit from international legal protection. Associations should enjoy, inter alia, the rights to express opinion, disseminate information, engage with the public and advocate before governments and international bodies for human rights. (A/HRC/20/27, paras. 63 & 64).

We would also like to refer your Excellency’s Government to the fundamental principles set forth in the Declaration on the Right and Responsibility of Individuals, Groups and Organs of Society to Promote and Protect Universally Recognized Human Rights and Fundamental Freedoms, also known as the UN Declaration on Human Rights Defenders. In particular, we would like to refer to articles 1 and 2 of the Declaration which state that everyone has the right to promote and to strive for the protection and realization of human rights and fundamental freedoms at the national and international levels and that each State has a prime responsibility and duty to protect, promote and implement all human rights and fundamental freedoms. Furthermore, we would like to bring to the attention of your Excellency’s Government the following provisions of the Declaration:

article 5 (a) and b), which provide for the rights to meet or assemble peacefully, and to form, join and participate in non-governmental organisations, associations or groups, for the purpose of promoting and protecting human rights and fundamental freedoms;

article 13 (b) and (c) which stipulate that everyone has the right, individually and in association with others, to solicit, receive and utilize resources for the purpose of peacefully promoting and protecting human rights and fundamental freedoms.