The Palestinian Boycott, Divestment and Sanctions National Committee (BNC) supports the legitimate demands of Palestinian political prisoners in their open-ended hunger strike, and calls for stepping up the global BDS campaign to end Israeli impunity.

For the fifteenth day in a row, our brave political prisoners continue their open-ended hunger strike in Israeli prisons, challenging the walls of silence and international complicity, and refusing indignation and the persistent violations of their rights.

The BNC, the largest Palestinian civil society coalition representing the overwhelming majority of unions, coalitions and political forces, fully supports the hunger strike called for by Palestinian prisoners and endorses their legitimate demands for:

In support of Palestinian political prisoners’ hunger strike, the BNC calls for intensifying the global Boycott, Divestment and Sanctions (BDS) campaign against Israel as the most effective way to pressure Israel until it abides by the Palestinian people’s rights in full by:

1. Intensifying the boycott of Israeli academic institutionsâ€”all complicit in Israel’s occupation and apartheid–in response to the denial of Palestinian prisoners’ basic right to education

2. Organizing broad boycott and divestment campaigns around the world targeting Israeli and international companies that have contracts with the IPS or other authorities to provide the large sector of prisons, detention facilities and the farcical Israeli court system. These contracts make companies complicit in grave violations of human rights international law resulting from the exploitation of Palestinian prisoners to generate profits, forcing prisoners to pay exorbitant prices due to the lack of alternatives. We demand that the Palestinian leadership bans these companies from private and public tenders, and ask for the strict application of the boycott legislation in the Arab world against these companies.

3. Boycotting the Israeli Medical Association (IMA) and expelling it from the World Medical Association (WMA) as a result of the systematic collusion of its members with torture, and its persistent violations of the seminal anti-torture code for doctors, and the Declaration of Tokyo, obliging doctors to denounce and report torture whenever they encounter it. There is voluminous evidence documenting the visits of Israeli doctors to prisoners, seeing prisoners at various points during and after episodes of torture, and failing to take a proper history or make protest, but instead, returning the prisoners to their interrogators. This includes the IMA’s complicity and silence during the current Palestinian prisoners’ hunger strike, as IPS has been reported to confiscate salt from prisoners rooms, which is essential for their health and safety during the strike. We recall here how the Medical Association of South Africa’s was obliged to withdraw from the WMA on the issue of medical complicity1.

1 For more information, see:http://www.bricup.org.uk/documents/archive/BRICUPNewsletter45.pdf. Both Physicians for Human Rights-Israel, and the Public Committee Against Torture in Israel (PCATI) have submitted documentation to the WMA in support of the demand for examining the record of complicity of the IMA in torture.

2 Refers to Ghassan Kanafani’s famous Why didn’t they bang the sides of the walls? from his novel, Men in the Sun. Kanafani is a leading Palestinian writer who was assassinated by Israel in 1972 at the age of 36. 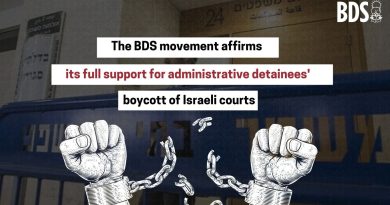 One year since Israel’s Gaza massacre and ten years since the launch of the BDS movement: building the boycott is more important than ever