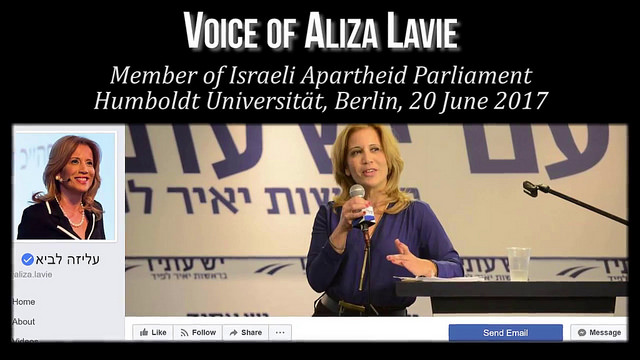 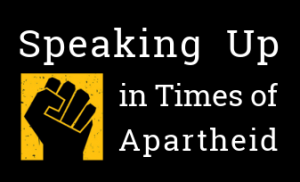 On June 20th 2017, we, three human-rights activists, engaged an act of political protest, which was directed at an official Israeli state representative, MK Aliza Lavie (Yesh Atid political party). The aim of action was twofold: first, to protest Lavie’s “Hasbara” event, which was hosted by Humboldt University, and second, to raise public awareness to Israel’s criminal responsibility in perpetuating an apartheid regime.

MK Lavie herself is personally accountable for her role as a coalition member during the 2014 onslaught on the besieged Gaza Strip, where over 2,200 people have been killed, including 89 entire families that were obliterated. Furthermore, the protesters began by emphasizing that Lavie appears in Humboldt University as a representative of a criminal apartheid state. Given that under international law the Crime of Apartheid is classified as a crime against humanity, we, as people of conscience, were morally obligated to perform our civil responsibility and speak up against those very horrendous crimes that were, and still are, being carried out in our name. 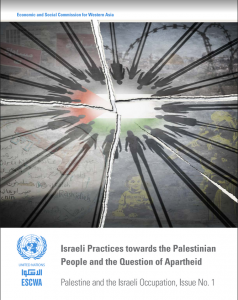 ❝ The report concludes that the weight of the evidence supports beyond a reasonable doubt the proposition that Israel is guilty of imposing an apartheid regime on the Palestinian people, which amounts to the commission of a crime against humanity, the prohibition of which is considered jus cogens in international customary law. The international community, especially the United Nations and its agencies, and Member States, have a legal obligation to act within the limits of their capabilities to prevent and punish instances of apartheid that are responsibly brought to their attention. More specifically, States have a collective duty: (a) not to recognize an apartheid regime as lawful; (b) not to aid or assist a State in maintaining an apartheid regime; and (c) to cooperate with the United Nations and other States in bringing apartheid regimes to an end. Civil society institutions and individuals also have a moral and political duty to use the instruments at their disposal to raise awareness of this ongoing criminal enterprise, and to exert pressure on Israel in order to persuade it to dismantle apartheid structures in compliance with international law. The report ends with general and specific recommendations to the United Nations, national Governments, and civil society and private actors on actions they should take in view of the finding that Israel maintains a regime of apartheid in its exercise of control over the Palestinian people. ❞

Israeli Practices towards the Palestinian People and the Question of Apartheid, p.7

Our non-violent act of resistance, of speaking truth to power, corresponds to our constitutional right of free speech, a right which is not afforded by the Israeli regime and its heavy use of state censorship. Notwithstanding, the German media’s covering of the event, not only inaccurate but also substandard in terms of journalistic writing, has fully aligned itself with Zionist media and Israel’s state ideology to depict our civil duty as an illegitimate expression of antisemitism. Such an outrageous claim joins a much more disturbing and broader tendency seen over the past years, which includes DIE LINKE and SPD decisions to de-legitimize and oppress a peaceful civil society movement calling for Boycott, Divestment and Sanctions against the State of Israel — a state which doesn’t abide by international law.

Civil courage, we maintain, is the answer to the ongoing attempt to narrow down Germany’s discursive sphere in which critically thinking individuals fear of being blacklisted and tagged as antisemites, thereby preempting the chance of any meaningful protest against abuse of state power, settler colonialism, and violation of international law. The lack of analytical capability of distinguishing racism against Jews from critique of Israeli policies is persistently being used to fend off any criticism of Israel’s illegal and immoral practices.

These smearing attempts are all the more futile considering that two of the activists are Israeli citizens and descendants of Jews who survived the holocaust, the death-trains, the death-marches and the concentration camps. While Yesh Atid political party abuses the memory of the holocaust for political gain, the slander against us and false accusations of antisemitism are all the more reprehensible considering the century-long Jewish opposition to Zionism, including the legacy of holocaust survivors who oppose the crimes of Zionism.

We write here in the name of Marek Edelman, a staunch anti-Zionist who was deputy commander of the Warsaw Ghetto Uprising, a Polish hero (awarded the Order of the White Eagle) and a world-renowned cardiologist. Yet, the State of Israel actively works to erase his existence from Israeli history books and has gone to great lengths to deny his legacy of anti-Nazi and anti-Zionist resistance. When the Polish government held the 50-year commemoration of the Warsaw Ghetto Uprising it was the Israeli government which demanded that Edelman, the Polish icon who commanded the uprising and was one of its sole survivors, would be dis-invited from the ceremony.

We write here in the name of Hajo Meyer, the survivor of Auschwitz concentration camp, director of A Different Jewish Voice (EAJG) and member of the International Jewish Anti-Zionist Network (IJAN). Meyer died in August 2014 on the very day that an open letter signed by 44 holocaust survivors and over 300 descendants of survivors had been published on the NY Times. The letter with Meyer being the first on its list of signatories, accuses Israel of committing no less than genocide in Gaza and calls on the world to endorse the BDS campaign in order to hold Israel accountable for its actions. We also write here in the name of Hannah Arendt, Hedy Epstein, Victor Klemperer, and many others.

While one of the Israeli activists reminded MK Lavie of her complicity in the 2014 Gaza massacre, it was the Palestinian Majed Abusalama, first-hand witness and survivor of at least three Israeli onslaughts on Gaza in 2008, 2009 and 2012, who sat quietly throughout the meeting. During the Q&A session Abusalama raised his grievances concerning the talk as well as the physical violence that some of the organizers engaged in against the demonstrators, after which he was removed from the hall.

Following Yesh Atid’s false claims, the ensuing media reports audaciously accused the demonstrators of violence and of antisemitism, towing the Israeli propaganda line of accusing the victim, as follows:

It is unfortunately not at all surprising that violating our bodily autonomy by the use of unauthorized violent means to oppress political dissidence did not receive equal coverage, nor was it addressed by Humboldt University and the Berlin Senate. Moreover, we denounce the shameful position taken by Humboldt University regarding the event. As a public academic institution of higher education that places human values at its core, it is a dark moment when the perpetrators of a crime against humanity are embraced within its premises.

We see value in dialogue even with those who hold diametrically opposed views to ours and therefore would not have interrupted the other speakers at the event. At the same time, backed by the tenets of international law, we maintain that an official representative of a state that systematically violates the law and does so as a matter of policy, a state whose modus operandi is the practice of crimes against humanity, must not be given legitimacy for its illegitimate practices. Certainly, it should not be embraced within the halls of academia that claims to draw its raison d’etre from our shared human and humanistic values. This also holds true to the legal obligations of any state and the German state in particular.

Given the attempts to silence freedom of expression in Germany concerning these issues, we find this disposition to be dangerous for the future of Germany’s civil sphere as a whole. We urge all those of you who hold dear the values of a free civil society to take a stand against state oppression and demand the end of German complicity in the violations of international law – also with regard to the Israeli case. We call upon you to voice your position, to stand on the right side of history, and to join us in the struggle for freedom, equality, and justice in Israel-Palestine.