The protest was initiated by a group of Berlin-based Palestinian, Israeli and Iranian activists.

Protest action in front of the booth of israeli weapon manufacturar “Rafael” at the Berlin air fair ILA, September 2012. 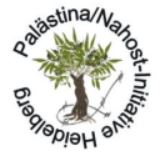