Occupied Jerusalem, March 26, 2016–The Palestinian Campaign for the Academic and Cultural Boycott of Israel (PACBI) calls on the German government and the Göttingen Academy of Sciences and Humanities to refrain from collaborating with the Israeli government and its complicit institutions in piecing together parts of the Dead Sea scroll.

The Gottingen Academy of Sciences and Humanities together with the Israel Antiquities Authority, Haifa University and Tel Aviv University are to join efforts in this collaboration in a project funded by the German-Israeli Project Cooperation, a program of the German Ministry of Education and administered by the German Research Foundation.[1] The Dead Sea scrolls, stolen from East Jerusalem during Israel’s 1967 military invasion and occupation of the Palestinian West Bank, are part of Palestinian cultural heritage that Israel has illegally appropriated in the course of its colonial repression of the Palestinian people.

Germany’s government will be in violation of the 1954 Hague Convention for the Protection of Cultural Property in the Event of Armed Conflict, which it has signed alongside with Israel.[2] The First Protocol of the Convention obliges Germany to take custody of the scrolls when they enter German soil as per Article 2 of the Convention. Germany is also a signatory to the Convention on the Means of Prohibiting and Preventing the Illicit Import, Export and Transfer of Ownership of Cultural Property (1970). This convention outlaws the import, export or transfer of ownership of cultural property.

The German government is also cooperating in this project with the Israeli Antiquities Authorities (IAA) which is based in occupied East Jerusalem. Israel illegally annexed Jerusalem, an act that is not recognized by the UN or the EU, including Germany, imposing its sovereignty on Palestinians and expanding its settlements there. By cooperating with an Israeli government entity with its head office in occupied East Jerusalem Germany is not only failing to comply with its international law obligations not to recognize unlawful acts by the occupying power. It is also betraying its rhetorical opposition to Israel’s occupation and legitimizing Israel’s illegal annexation of Jerusalem and its policies of ethnic cleansing in the city.

Since 1967, hundreds of thousands of precious artifacts have been illegally removed by the Israeli Antiquities Authority (IAA), Israeli soldiers, and illegally operating antiquities dealers from the occupied West Bank and Gaza Strip in violation of international law. The confiscation and theft of Palestinian cultural heritage are part of Israel’s attempts to erase Palestinian memory and cultural identity. Palestinian heritage reflects the identities and beliefs of the various groups who lived on its land over the centuries, including pagans, Muslims, Christians and Jews.

As part of Israel’s attempts to ‘zionise’ the history of Palestine in order to deny that this land was always home to indigenous multicultural and multi-religious groups, it extended its expulsion from Palestinian land and properties, to looting Palestinian cultural treasures, among them books, manuscripts, personal papers, photographs and works of art. Since 1948, there was systematic looting of tens of thousands of Palestinian books in a joint operation by the Haganah – what became the Israeli army – and the Israeli national library.[5]

“Cultural genocide extends beyond attacks upon the physical and/or biological elements of a group and seeks to eliminate its wider institutions… Elements of cultural genocide are manifested when artistic, literary, and cultural activities are restricted or outlawed and when national treasures, libraries, archives, museums, artifacts, and art galleries are destroyed or confiscated.”[6]

The Israeli academic institutions participating in this project are deeply complicit in Israel’s violations of Palestinian human rights. Haifa University considers itself Proud to Be Academic Home of (Israeli) Security Forces”.[7] The university has an organic partnership with the Israeli regime of occupation, colonialism and apartheid against Palestinians. The university has also fiercely repressed its Palestinian students (second-class citizens in Israel) with measures that limit their academic freedom and freedom of expression in conformity with the policies of the state against them.[8]

Under the guise of archaeological digs, Tel Aviv University (TAU) is already active in the plundering and theft of Palestinian cultural heritage in occupied East Jerusalem in cooperation with illegal Israeli settler organizations.[9]Israeli settlers violently harass Palestinian residents of Silwan daily where the digs are taking place, with the backing of the Israeli military intent on expelling them. TAU has not only designed tens of weapons used by the Israeli occupation forces. Its Institute for National Security Studies (INSS) also takes credit for the development of the so-called Dahiya Doctrine, or doctrine of disproportionate force, that is adopted by the Israeli army, and which calls for “the destruction of the national [civilian] infrastructure, and intense suffering among the [civilian] population,” as means of defeating an otherwise “impossible” to defeat non-statal resistance.[10]

By cooperating with these two Israeli academic institutions the Göttingen Academy of Sciences and Humanities is giving its tacit approval to their deep complicity in the oppression of Palestinians and outright abetting in the violation of international law for handling the Dead Sea Scrolls stolen by Israel from the occupied Palestinian territory.

We call upon the German government to respect international law and refrain from legitimizing Israel’s theft of Palestinian cultural heritage and falsifying our indigenous history. This collaboration is not only deeply complicit in Israel’s oppression of Palestinians, but also betrays German’s commitment to the return of plundered cultural heritage from occupied territories, a lesson from its Nazi past, and its stated opposition to Israel’s annexation of East Jerusalem. We call on the Göttingen Academy of Sciences and Humanities to refrain from cooperation with Haifa University and Tel Aviv University, two entities that are deeply involved in laying the scaffolding for Israel’s decades-long and brutal occupation and oppression of Palestinians. 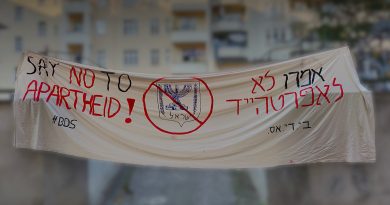 Say No to Apartheid: demo against Seret film festival 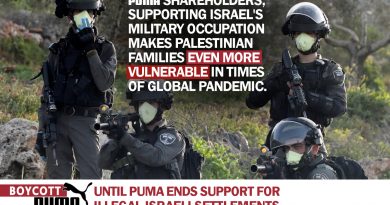 Sounds of Israel in der Elbphilharmonie