As the cultural boycott of Israel gains pace around the world, some artists, writers and cultural workers are finding it increasingly difficult to engage consistently and coherently with the arguments posed by those advocating for boycott, divestment and sanctions (BDS). Insisting on performing music, exhibiting artwork or accepting literary prizes in Israel, these cultural figures have resorted to one of at least three arguments to defend their violations of the cultural boycott guidelines set by Palestinian civil society. Some argue that they do not know enough about the nuances of the ‘conflict’ between Palestinians and Israelis to take a position, so they prefer to ‘go see for ourselves’. Others claim that if they were to begin boycotting one country, like Israel, for its violations of international law and human rights then where would they stop, given that many countries fall into the same category and may even be worse offenders. A third group, usually quite politically aware and, to an extent, sympathetic to the cause of Palestinians, argues that BDS is not in the best interest of Palestinians and that artists should engage Israelis since it is through dialogue and communication that ‘peace’ will come about. We have thought it necessary to address these points.

1. We Do Not Know Enough to Take a Political Position – We Need to See for Ourselves

To this group, we simply ask that they do the sensible thing and stay away from Israel until they are knowledgeable enough about the ‘situation’. Artists are not being asked by one or two local individuals to boycott Israel, which could be dismissed as uninformed or unrepresentative of the common interest. In the Palestinian case, artists are being asked to respect the cultural boycott of Israel and its complicit institutions by a majority of Palestinian civil society, over 170 organizations from across the political and social spectrum, and especially by a great majority of Palestinian artists and cultural figures. If the Palestinian near-consensus is not sufficient to convince them, then they can at least refrain from performing, accepting prizes, or exhibiting art in Israel until they have visited the occupied Palestinian territory and spoken with exiled Palestinian refugees. However, hiding behind supposed ignorance as an excuse for complicity in whitewashing Israel’s criminal behavior is unacceptable morally or logically, and is not befit for cultural workers who claim to defend human rights or care about peace, justice and equality for all.

Moreover, did everyone who joined the cultural boycott of apartheid South Africa insist first on seeing for themselves before taking a position? Can we not criticize or take effective action against a state abusing human rights until we have visited that state? Finally, how can entertaining Israel, despite its occupation and apartheid, be considered non-political, whereas refraining from doing so is seen as political? 1

2. Why Not Boycott Other Human Rights Offenders Too?

The main points to consider in this context are: (a) Whether the oppressed have called on international artists to support a boycott of their oppressors to end oppression, and (b) whether the international artist’s own state is implicated – and to what extent – in supporting or maintaining the system of oppression in a country targeted by the boycott in question. To address (a), we refer to the Palestinian consensus argument mentioned above. Artists who sincerely care about human rights and upholding international law should at least listen to the oppressed voices coming from within Palestine who are pleading for BDS. They should consider the presence of a local BDS initiative that has developed into a worldwide protest movement and international picket line. It takes a comprehensive, consistent and ethical non-violent form of struggle to face the forms of Israeli oppression, and it is precisely this struggle that these artists, writers, and cultural workers reject when they ignore calls by the Palestinian BDS movement.

While the Palestinian Campaign for the Academic and Cultural Boycott of Israel (PACBI) sees all injustice and racism, including anti-Semitism, as deserving to be condemned and resolutely fought, each struggle and context generates its own tools of resistance. It would, therefore, be disingenuous to respond to a people’s demands for BDS by telling them to wait till the world boycotts all regimes in violation of human rights before one can boycott Israel. If a movement by Chinese activists, say, began today calling for a boycott of China, would we argue that we should not heed the Chinese call because we are not boycotting Israel, Iran, Saudi Arabia, or the US? Should we have ignored calls to boycott the South African apartheid regime in the last century because we were not boycotting other regimes – some committing worse crimes – at the time?

Such arguments are a diversion from the real issues facing us, namely that there is, today, a growing BDS movement called for by an unprecedented majority of Palestinians reaching out to the world to heed their call, and to hold Israel accountable for its crimes of apartheid, as defined in international law 2, and for its wholesale violations of international law and abuse of human rights.

As to point (b) above, Israel is today the only state practicing a three-tiered system of oppression – occupation, colonization and apartheid – while being treated by Western states as part of their ‘democratic club’ and, consequently, receiving unlimited political, economic, diplomatic, academic and cultural support from them. This entrenched and persistent Western complicity is precisely what perpetuates Israel’s colonial oppression and makes it a moral obligation for citizens of the West to endeavor to end their states’ respective complicity in Israel’s crimes. Striving to end collusion in human rights violations should be the absolute minimum that we expect from any conscientious artist or cultural worker.

3. We Do Not Think BDS is in Palestinian Best Interest

This is perhaps the most problematic of all positions, primarily because it is most veiled in a concern for Palestinian rights, and because these cultural figures think somehow that they know what is best for Palestinians. This is another form of cultural colonialism, par excellence, as foreigners also claim to know best how Palestinians should struggle and behave – one hears clear echoes of the ‘civilizing mission’, for example, and of the white man coming to educate the native.

In some cases, artists or writers may attempt to cloak personal interest and/or fear of the expected wrath of Israel and its influential lobby groups, with a mantle of wisdom and concern for the ‘real’ interests of the oppressed. As Desmond Tutu says:

Struggles for freedom and justice are fraught with huge moral dilemmas. How can we commit ourselves to virtue – before its political triumph – when such commitment may lead to ostracism from our political allies and even our closest partners and friends? Are we willing to speak out for justice when the moral choice that we make for an oppressed community may invite phone calls from the powerful or when possible research funding will be withdrawn from us? 3

Most often, those who disregard BDS as a legitimate form of Palestinian civil resistance are in fact dismissing the package of Palestinian rights protected under international law, and often confine these rights to Palestinians living under occupation in the West Bank and Gaza, a mere one third of the Palestinian people. However, Palestinians are not just fighting to end a 44-year old illegal occupation, but also for equal rights for Palestinian citizens of Israel, and for the Palestinian right of return in accordance with UN Resolution 194. When the oppressed have come together to develop a form of ethical, peaceful resistance to fight for these rights, when they have worked hard over the years to build a movement with consensus, and when they are appealing to international cultural workers to stand with them in solidarity and put pressure on the Israeli apartheid government, how does a direct slight of the BDS movement serve the interest of the Palestinians? And who decides?

In some cases, otherwise liberal minded cultural workers refer to objections from their Israeli colleagues to justify their rebuff of the voices of the oppressed. Deferring to the hegemonic discourse of the oppressor obviously circumscribes the rights of the Palestinian people to what fits the selective agenda of this or that Israeli writer, activist, or group. Moreover, it renders the Palestinian voice absent in our own struggle for self determination. Imagine people took the lead from white South Africans in the struggle against South African apartheid, and dismissed the voices of the black population!

In their so-far futile attempts to skirt real pressure on Israel and to blunt or thwart the spectacular growth of the BDS movement, some on the Zionist â€œleftâ€ have misleadingly promoted a peace industry fraught with unequal â€œdialogueâ€ where Palestinians lack any power to influence the outcome and joint projects that do little more than normalize oppression rather than help to end it. When Palestinians refuse to engage in this unprincipled engagement and insist, instead, on calling for effective international solidarity in the form of BDS, the adoption of international cultural workers of the Israeli tactic cannot but undermine the cause of freedom, justice and equality—the main slogans of the BDS movement.

1 As Archbishop Desmond Tutu quips, investing in apartheid South Africa was not seen as a political act; divesting was. http://www.timeslive.co.za/world/article675369.ece/Israeli-ties—a-chance-to-do-the-right-thing
2 http://classic-web.archive.org/web/20061001200717/http:/www.unhchr.ch/html/menu3/b/11.htm
3 http://www.timeslive.co.za/world/article675369.ece/Israeli-ties—a-chance-to-do-the-right-thing 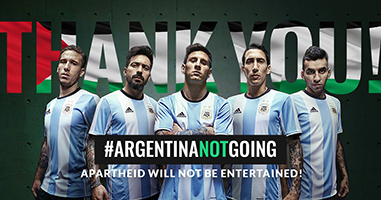 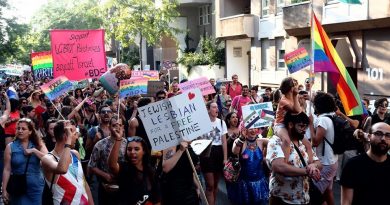